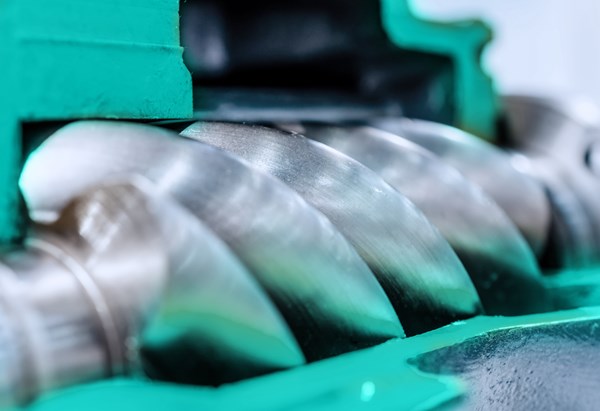 The cheetah is the world’s fastest runner, but an average swimmer. Sports cars are magnificent on the road, but—unless you’re James Bond—they’re useless in the water. In short, we perform our best when we’re in a suitable environment. Your vessels’ air compressors are no exception; they should be designed with the sea in mind.

We’ll now dissect a marine screw compressor. Come along as we follow the air on its journey from inlet to outlet, and learn why and how each component has been carefully designed with the sea in mind.

The air below the deck is typically hot, humid and saline. It’s not a friendly environment, and your compressor’s build quality needs to reflect this.

The process starts with the compressor sucking in air from the surroundings. It enters the air end, which houses the screws. Oil is injected, acting as a lubricant and a coolant. It also removes contaminants and seals the clearances for better efficiency. Once it has done its work, the oil passes through an oil filter before it is recirculated into the air end.

Why the Oil Is Such a Pressing Issue

Hot, humid air combined with relatively cool oil, will trigger condensation—if the physical conditions exceed the ability for the air to withhold the water in vapour form. If this happens, the water will blend into the oil as it circulates, gradually increasing the water contents of the oil. Soon, the oil/water mixture will turn into a milkwhite substance that clogs up the filter, triggering alarms and frequent filter replacements. This drives up operation costs.

A more acute consequence is that the water ruins the oil’s ability to lubricate and cool. This leads to corrosion of the bearings and the carbon steel. Damage to the bearings comes next. Then the rotors grind into one another, causing irreparable damage. Also, the lack of cooling itself might trigger overheat of the system, and eventually shut down the unit due to overtemp.

The key to avoiding condensation, is to make sure the running temperature is high enough for the water to remain in vapor form. If the surrounding air is 45°C, an oil temperature of approximately 90°C will cut it. As environmental conditions vary constantly, you need a mechanism that ensures the appropriate oil temperature at all times.

Any TMC compressor is equipped with a sophisticated Thermal Mixing Valve (TMV). It monitors ambient temperature, outgoing pressure, and oil temperature. Those three parameters tell the TMV what delta T to produce to prevent condensation.

Why Not Go for Oil-Free Compressors?

With an oil-free compressor, you’ll naturally avoid the oil issues. But they’re not a good choice for a marine environment.

No oil means no cooling. Which means you have to compress the air in multiple stages, resulting in a bulkier compressor, driving up costs and the physical footprint. True, an oil-free compressor saves you a little bit on oil separator filters. But the day you have to replace the air end, it's not one unit you’re replacing, but two (on account of the multi-stage compression).

In addition you rely on 100 percent pure air at the inlet. While you can expect such conditions in a food production facility—the native environment for oil-free compressors—it’s practically impossible to achieve below the deck of a commercial vessel. The ambient air there is likely to contain oil vapor and particulate matter, forcing you to treat it anyway.

Before we leave the air end, a quick word on sizing. Marine air compression will regularly involve extremely high temperatures. Therefore, make sure that the oil cooler and the after cooler is properly sized. In a marine air compressor, sizing will be appropriate by design.

A common mistake is to size according to industrial standards. The operational environment on shore is completely different from what you find on board a ship or an offshore installation. The screws push the air into an oil separator receiver. This unit consists of two stages:

In the cyclone separator, air gets swirled around violently like in a tornado. The heavier oil particles are then ejected from the air stream, falling to the bottom of the cylinder. It’s a highly efficient process, where 99.9 percent of the oil is removed.

The air then continues its journey through an in-to-out filter. This solution is unique to TMC compressors, in that the air stream goes from the core and outwards, not the other way around.

There are numerous benefits to this approach. You reduce the air velocity, prolonging the time of contact between air and filter. Also, the filter is more robust at the core, which means it’s more equipped to handle the high initial pressure better than the peripheral filter layers, preventing collapse of the filter. It also means that the outer layer, where the surface area is the greatest, becomes the final filtration stage. All in all, it translates to a more effective, reliable filter.

Stage 3: From the Discharge Valve to the After Cooler

Having passed through the filter, the air is ready for some cooling. The non-return discharge valve, which only opens at a minimum positive pressure, lets the air through in appropriate measures.

To cool down the compressed air to a level that will be acceptable for the downstream equipment, the air enters the after cooler. This cooler, which should be designed for the relevant ambient conditions, reduces the temperature of the compressed air to a level close to the ambient temperature. The water that we earlier strived to contain in vapor form, now should condensate. That way, it can be transported out from the process by the water separator directly following the cooler.

Stage 4: Drain the Water – Not the Energy

A marine air compressor needs a proper water separator. By proper, we mean a cyclone separator with level-controlled drainage.

The conventional approach is to use a solenoid valve on a timer. It opens up on regular intervals, causing pressure from the compressor to blow the water out. The problem is that it keeps going irrespective of the water level, and every instance results in a systemic pressure drop – and loss of energy.

At TMC, the timer has been replaced by a level sensor, which is only actuated if the water exceeds the defined threshold. Also, the water is drained by gravity, not by force. It means no compressed air is wasted.

Once the water has been separated from the airstream, the compressed air proceeds to its application, or to after treatment, depending on the downstream scenario.

A successful compressor strategy at sea is a holistic one. Every link in the chain needs to hold its own. That’s why TMC uses only components—tubes, o-rings, seals, gaskets—with extraordinary durability, specified for high temperatures. Compressor components need to handle conditions ranging from -35°C to +135°C.

The same quality of components is needed in the Thermal Mixing Valve (TMV), where oil temperatures can remain more or less at a constant 110°C.

Anything that is intended for the sea, needs high resistance to roll and pitch. Make sure your air compressor is rugged and ready, with a control system to match.

Anything you can do without third-party involvement, is hugely beneficial. Opt for a compressor supplier that offers high spare part availability, and self-serviceability coupled with a strong support system.

A couple of weeks ago, we provided a brief introduction to air lubrication systems (ALS). Today, ...

Our vision: To have the most satisfied customers in the business

TMC's heritage is from the harsh Norwegian marine environment. The company was founded several...

Clean air on board: Oil-free or oil-injected compressors?

Pneumatic air systems on board consist of numerous delicate components, sensitive to oil, dust and...